In the News, Partner and Product, Press Releases

“The value that the new Rigid Networking series provides comes from its edge-only deployment capability,” said Tom Larson, Director of Sales and Engineering at BCDVideo, “The Rigid Networking switches extend the network outdoors for parking garages, street poles, and other remote locations.” 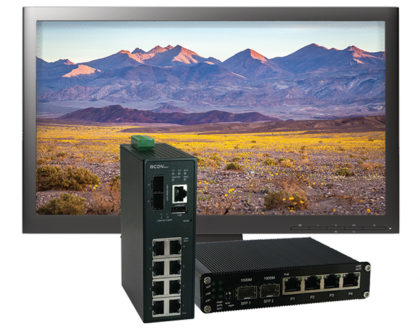 Environmentally hardened to operate in extreme temperatures ranging from -40oF to 167oF. Up to 8 PoE+ ports allow Rigid Networking to tap into existing infrastructure and offer centralized power management for each device. Further advantages of Rigid Networking include multicast capabilities, redundant power, and port naming. And, the fanless design protects mission-critical surveillance from dirt and dust.

“Our introduction of Rigid Networking will offer the most cost-effective solution to almost any environment,” said Jeff Burgess, President of BCDVideo, “These switches are built for mobile and remote video surveillance applications. Nothing else on the market matches their performance.”

“With the announcement of our Rapid Networking products, customers can focus on how best to  protect sensitive infrastructure and the public, rather than with network-related issues that tend to plague these remote surveillance deployments.”