What is the Difference Between hHCI and HCI?

As complex security threats have evolved, security technology has stayed one step ahead. Today, end customers across all verticals are deploying more smart sensors and intelligent video cameras than ever before—often outfitted with artificial intelligence (AI) to optimize threat detection and gain new business operations insights. However, as every IT professional knows, where there’s influxes in data, there will need to be an evolution in storage strategies.

For enterprises that need immediate, reliable and secure access to the data aggregated by their security system—especially those that capture massive amounts of video data—that need increasingly exceeds the parameters of traditional data infrastructure, often complicating IT and cost efficiency across the board. Around 2011, hyperconverged infrastructure (HCI) presented an exciting new model for data storage. Today, hybrid hyperconverged infrastructure (hHCI) addresses the limitations HCI created to better protect safety and security businesses from data loss and system idling.

For 10 years now, IT professionals have relied on HCI for its efficiency and simplicity. Because this software-defined IT infrastructure virtualizes all the elements of a conventionally “hardware defined” system (computing, storage, and networking), management of all resources can be shared across all instances of hyperconverged infrastructure, eliminating traditional data–center inefficiencies and reducing the total cost of ownership for all parties. In the security industry, this virtualization allowed multiple operators immediate and constant access to video data at any given time. It also offered a different avenue for protecting and storing data.

As with any IT innovation, however, a number of challenges accompanied this new infrastructure. Traditional HCI makes it difficult to increase compute and storage independently, for example, as the two are bound together at each node in a cluster. As a result, if an operation only needs more of one, scaling both in tandem not only drives up costs but also leaves one of the two in excess, leaving compute to idle or storage to go unused.

Traditional HCI was a huge step in the right direction, especially for sensitive video data storage operations in the security industry. But these challenges beg a new approach.

Hybrid Hyperconverged Infrastructure: The Best of Both Worlds

Leaning on the strengths that HCI offered, such as instant access and IT efficiency, hHCI separates compute and storage from each other, in order to simplify independent scalability. In reality, storage and compute are almost always consumed asymmetrically. Whether a security system increases retention times or installs more security devices, storage is almost always consumed faster than compute. Because hHCI allows users to scale the two independently, this reduces hardware footprint, total cost of operations, and power requirements, while also ensuring faster disaster recovery and efficient, centralized system management. 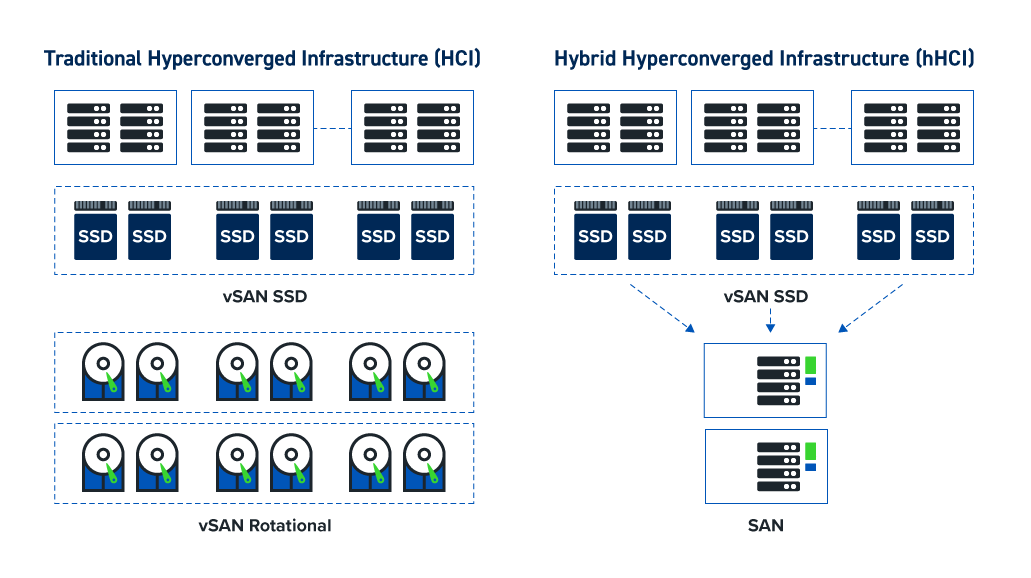 When deciding between HCI and hHCI system designs, integrators and consultants should consider the unique requirements of their customer’s security ecosystem. With the growth of video data storage requirements, ensure your system is protected against data loss, system downtime, and uneven scalability with hHCI.