Which BCD Solution Do I Use for My Application? 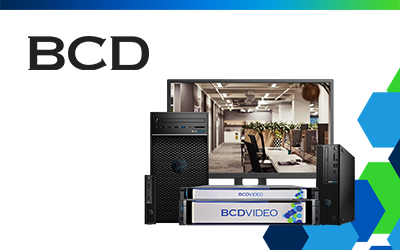 When considering a new IP video surveillance infrastructure solution, it’s imperative that customers understand their system’s needs so that integrators can cater their storage design to perform at its best within a given budget. A deployment of 12 cameras, for example, is going to require a completely different infrastructure than one deploying 120 cameras.

There is no one-size-fits-all solution in the IP video market—but this is always to end users’ benefit. After all, more customization and specification mean that surveillance hardware can be custom-built to minimize costs of deployment while maximizing performance.

Below are three unique benefits that BCD brings to the table, making sure their solutions deliver the right system for every user.

When building surveillance storage that anticipates future growth, adding more cameras does not simply mean integrating more servers. Traditional hyperconverged infrastructure (HCI) deployments usually consist of a SAN or NAS appliance, an array of host servers, and a virtualization hypervisor. But with BCD’s Hybrid Hyperconverged Infrastructure (hHCI) for video surveillance, all these products are combined into one, meaning that server, storage, hypervisor, and management are all able to operate together under one roof.

These systems are deployable in under an hour and require minimal integration time because they all originate from the same vendor. Compared to the weeks it would take to fully deploy a traditional infrastructure, the minimal downtime it takes to migrate your workloads to hHCI is seamless.

Namely, BCD’s hHCI designs are made to excel in always-on storage applications, such casinos, sports stadiums, campuses, and other high-camera-count operations. Because hHCI systems scale up computing power and scale out storage, whenever needed, customers can avoid paying unnecessarily for one in order to get the other.

For deployments that make use of high camera counts, retention times, and frame rates, as well as those which require long-term storage, BCD builds optimized enterprise solutions to meet these needs and grow with them. Employing servers with up to 416TB of storage, redundant power sources to prevent any interruption in operation, and RAID 5/6 support, these systems are optimized for any volume of data input.

Servers with high bay count and expansive networking also allow operators to scale their systems, minimize their hardware footprint, and protect their data with redundancy, which is crucial for customers who can’t afford downtime.

Lastly, one of the biggest obstacles for integrators looking to build network infrastructure for enterprise customers is limited resources. To meet this need, BCD offers a variety of solutions that make it easy to access experts and tailor solutions without a network engineer onsite. BCDVideo’s Provisioning Assistant Application, for example, can simplify the delivery of your security infrastructure by automating deployments of Layer 2 and Layer 3 high availability networks. More than anything else, BCD invests in delivering as much localized support as possible, in order to address a need as quickly as possible.

By choosing BCD as a solution provider, security customers gain 20+ years of surveillance storage expertise on top of unparalleled customer service and high performing, scalable, durable products. When it comes to quality, support, and reliability—BCD stands above the rest.

How can we support you? Let's talk!