Mission 500, a non-profit initiative focusing on the security industry and dedicated to serving the needs of children and communities in crisis, raised more than $120,000 at ISC West this year through their sixth annual Security 5K/2K Run/Walk and other events.

“The volunteer participation and fund raising efforts for Mission 500 at ISC West 2015 were stronger than ever. The Security 5K/2K run/walk and other M500 events raised more than $120,000 which will help improve the lives of children in need,” said George Fletcher, Advisory Council Member/Volunteer, Mission 500. “We are truly grateful to each and every corporate and individual sponsor that continues to help Mission 500 provide food, supplies, clothing, medical attention and education to children here in the US and around the globe.” 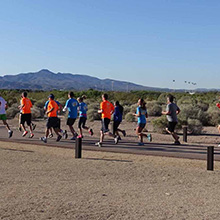 Max Burgess of BCDVideo was the top individual fundraiser with $1,780!

Proceeds from the April 16th event will support children in the U.S. through the Rebuilding Hope at Home program, which helps provide academic scholarships, school supplies, and essential items like clothing, personal hygiene supplies, and building materials, as well as disaster response and training for community organizations to empower young people. A portion of the proceeds will also support children in Tanzania and India by providing access to clean water, food, education, and healthcare.

The annual Mission 500 5K/2K received overwhelming support from across all areas of the security industry. The first place overall female runner was Breezy Wingfield (20:26) of Little Rock, Arkansas, and first place overall male runner was Fernando Perez (18:44) of Santiago, Chile. The Security 5K/2K event also featured its fourth 2K walk, with more than 185 registered to participate.

More than thirty 5K/2K participants became members of the 500 Club, which recognises volunteers who raise $500 or more for Mission 500. This fundraising added more than $25,000 to the final fundraising total of $40,000. 500 Club members received a custom Mission 500 track jacket and were also invited to take part in an essay-writing sweepstakes for a chance to win a pair of NASCAR tickets and tour of the garage and pit. The winning essay was written by Kent Pawlak.

“We are truly grateful to every corporate and individual sponsor that continues to help Mission 500 provide food, supplies”, says Geroge Fletcher, Advisory Council Member/Volunteer of Mission 500

Pelco was the lead team in fundraising, donating a total of $10,420 in individual and company-matched donations. Max Burgess of BCD Videowas the top individual fundraiser with $1,780, followed by Heather Miller with $1,725 to be matched by her employer, Anixter. Jesse Foglio, Mary Jensby, Stephanie Mayes and Ronnie Pennington each donated over $1,000. Mary Jensby, who traveled to Mexico on a volunteer trip sponsored by World Vision in October, also spoke about her experiences at the 5K/2K and post-event awards ceremony to help reinforce the importance of the industry’s collective efforts.

In addition, HID Global sponsored their second school kit build at ISC West and put together $10,000 worth of school supplies for children in a Title One School in the Las Vegas Area, Rex Bell Elementary School. Meanwhile, Altronix and ISC West Organisers Reed Exhibitions made a joint $10,000 contribution to Mission 500’s #ShowOrange campaign, which benefits children in poverty in the US.

Medal winners and sponsors were acknowledged at the Security 5K/2K awards ceremony. Mission 500 awarded its sixth “Mission 500 Humanitarian Award,” honoring individuals in the security industry who make important contributions to those in need, to Anne Glickstein of Protection One. Fluent Home was the fifth recipient of Mission 500’s Corporate Social Responsibility Award.

More than thirty 5K/2K participants became members of the 500 Club, which recognizes volunteers who raise $500 or more for Mission 500

Freeman, contractor of services to ISC West and its exhibitors, waived staff costs and fees for using audio-visual equipment during the 5K race and the awards ceremony, and Starbucks generously donated coffee to complement the post-race refreshments and food.

This year, both Qolsys and Alarm.com took home the trophy for the fastest team.  Runners and walkers came together in their orange race shirts, in support of #ShowOrange.

see the original article at sourcesecurity.com