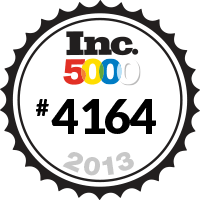 Milestone Technology Partner of the year BCDVideo, today announced that it has been named to Inc. Magazine’s annual ranking of the 5000 fastest-growing privately-held companies in the United States.

BCDVideo, a global provider specializing in IP security storage, announced today that it has been named to Inc. Magazine’s annual ranking of the 5000 fastest-growing privately-held companies in the United States. The median company on the exclusive list increased sales more than 140 percent since the start of 2010.

“We are humbled to be included within this prestigious listing. This is an honor truly shared by all of our employees. We are blessed to have such a dedicated team focused only on customer satisfaction and the company goal to do it ‘even better’ tomorrow,” stated Jeff Burgess, President of BCDVideo.

“As an Inc. 5000 honoree, BCDVideo.com now shares a pedigree with Intuit, Zappos, Microsoft, Under Armour, Oracle, and dozens of other notable recent alumni,” said Inc’s Editor in chief Eric Schurenberg.

BCDVideo, incorporated in 1999 as an IT reseller, migrated into the IP video storage market in 2008 after years of successful server installations at a number of the largest Fortune 500 companies. A global HP OEM partner, BCDVideo has hundreds of video-optimized IP recording servers installed by security integrators all over the world.

BCDVideo was also named earlier this year as Milestone Technology Partner of the Year.

“BCDVideo deserved this award for their innovative work in developing systems specifically optimized for Milestone XProtect® video management software, with a streamlined process and website to deliver quotes and receive orders, coordinating with the Milestone partner channel.